A group calling itself the American Humanist Association (AHA) got irate that a cross was sitting on a govt WW I veterans cemetery, filed suit to have the cross removed and has won. Here's the details... 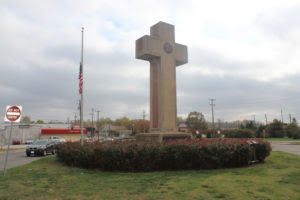 (Washington, DC, October 18, 2017)—A federal appellate court ruled today, in a case brought by the American Humanist Association (AHA) and three of its members, that a large Christian cross on government property in Bladensburg, Maryland, violates the US Constitution. The ruling by the Fourth Circuit Court of Appeals overturns an earlier decision by a federal district court upholding the cross.

“The court correctly ruled that the cross unconstitutionally endorses Christianity and favors Christians to the exclusion of all other religious Americans,” said Monica Miller, senior counsel from the AHA’s Appignani Humanist Legal Center.

So crosses are VERBOTEN, yet...

..this is OK to be displayed on public property. Any questions? 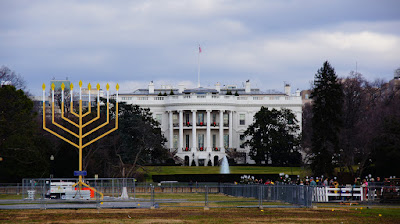 Being as they are SOOOO concerned about religious symbols on govt property, I wrote to AHA and asked them to file a court case against the large Menorah that is erected on the WH lawn each year. Here's the plea:

The large Menorah that is erected on the White House lawn each year is a violation of church and state, effectively endorsing one religion over the others.

I would like to see AH file a court case against the USG for this gross violation and if you do, I could help with some money. 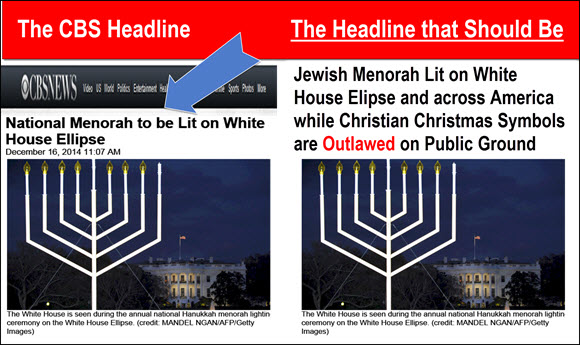 Out of curiosity, used their search engine and typed in the word 'Menorah.' NOTHING came back. Typed in 'CROSS' and 43 pages of law suits they've filed against crosses came up.

Gosh, what a surprise.

Nothing that better illustrates the Jewish extremist takeover of America than the triumphant Jewish War on Christmas!

Jewish organizations have been the leaders of the legal fight to ban Christian Christmas symbols from American public life. The largest Jewish organizations in America such as the American Jewish Committee, has financed and sponsored numerous lawsuits saying that Christian Manger scenes and Christian crosses cannot be erected on any public ground.

Even though such has been permitted during the entire history of the United States, they claimed these displays were harmful to Jews. They have also successfully banned Christmas Carols in schools and created the newspeak of “Winter Holidays” instead of “Christmas Holidays.”

With the media overwhelmingly owned and run by Jewish tribalists, and with the American political and judicial system thoroughly run by Jewish money and Jewish influence, they completely banned any Christian Christmas celebration from any public ground and in any public institution.

At the very same time they successfully banned Christian Christmas commemoration, Jewish extremist groups such as Chabad Lubavitch began to put up thousands of Jewish Menorahs up on public ground across America. Including a giant Menorah right across from the White House. It is proudly labelled in the Headlines of CNN and CBS as the National Menorah! Not only would a Christian manger scene or cross not be labelled the National Nativity Scene, such is outlawed in the United States!

What kind of Talmudic logic did our Jewish dominated political system use to justify the placing of Jewish Menorahs in thousands of public places?

They claimed it was simply a secular symbol and not a religious symbol. So, we are told that the oldest symbol of Judaism is not a religious symbol! All this while rabbis perform the traditional Jewish religious ritual of lighting the Menorah. Yet, not a single newspaper or media broadcast dares to point out the hypocrisy of banning Christian Christmas symbols but allowing Jewish religious Symbols and calling the Jewish Menorah the “National Menorah!”

The legal argument was “separation of church and state.” That even though the vast majority of Americans are Christian and even though Christian Christmas celebrations have been an intrinsic part of American and Western traditions and culture, they must be banned because no religious symbols can be allowed.

The lighting of the Jewish menorah on public ground across America is carried out under strict Jewish law, just as it was yesterday in front of the White House on public ground. According to an article in CNN, the 30-foot menorah stands high enough to be seen from afar, and its height is regulated under Jewish law.

“It’s got to be visible, so it has to be at least two and a half feet off the ground minimum, and not higher than 30 feet, because the rabbinical authorities deem that to be the height at which a person has to crane their neck to see it,” a leading Jewish Supremacist religious leader said.

First official White House Hanukah party held in December of 2001. Guess they were celebrating the Israeli masterminded 9/11 False Flag and all the death and misery to come...for Muslims.

This cult worship costs American taxpayers a lot of money.


Bush continued the tradition of White House ceremonies and receptions for Hanukkah, expanding both the guest list and preparations for the event. For example, after an embarrassing incident in 2004 when non-kosher foods were mixed up with some special kosher foods that had been brought in for the occasion, the Hanukkah party in 2005 began the tradition of kashering the White House kitchen so that all foods served at the party would be kosher.[4] According to Rabbi Levi Shemtov, director of the American Friends of Lubavitch and head of the team that kashers the White House kitchen for the annual Hanukkah party, the ovens are first scrubbed clean by Marines or Navy personnel employed by the White House, and are then heated to 500 °F (260 °C) to 600 °F (316 °C) to render them kosher. Servingware – including "hundreds of platters, thousands of pieces of silverware and other small items, and lots of stands and serving pieces" – are also kashered for the event.[1]