On 9/11, Israelis were Dancing with Joy at all the American Getting Murdered 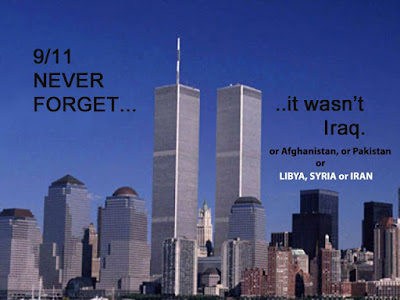 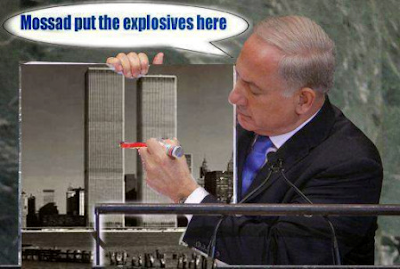 The FBI came to the conclusion... that the five Israelis arrested in New Jersey last September were conducting a Mossad surveillance mission and that their employer, Urban Moving Systems of Weehawken, N.J., served as a front. -Forward (A Jewish Magazine) March 15, 2002

"Evidence linking these Israelis to 9/11 is classified. I cannot tell you about evidence that has been gathered. It's classified information."--US official quoted in Carl Cameron's Fox News report (that was later erased from the Fox News website) on the Israeli spy ring and its connections to 9-11.

According to ABCNEWS sources, Israeli and U.S. government officials worked out a deal — and after 71 days, the five Israelis were taken out of jail, put on a plane, and deported back home. While the former detainees refused to answer ABCNEWS' questions about their detention and what they were doing on Sept. 11, several of the detainees discussed their experience in America on an Israeli talk show after their return home.
Said one of the men, "Our purpose was to document the event." 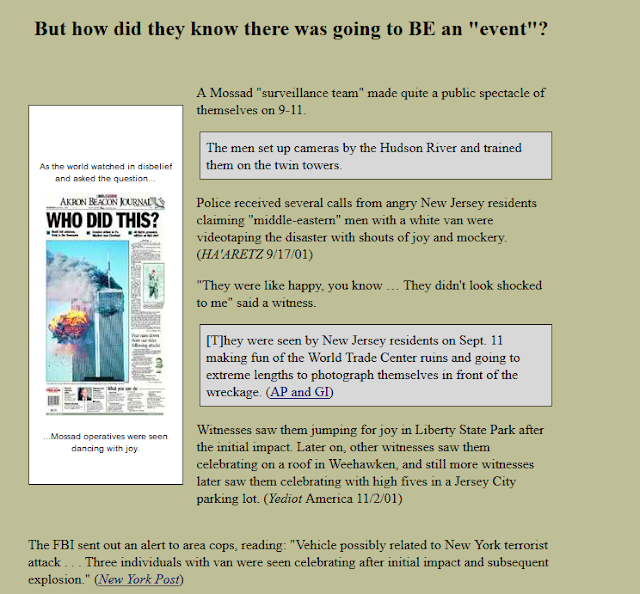 Palestinians are NOT a problem to anyone, except the Khazar land thieves that want to complete the genocide of the indigenous Palestinians, so they must either be killed, starved to death or forcibly moved to some hell hole. 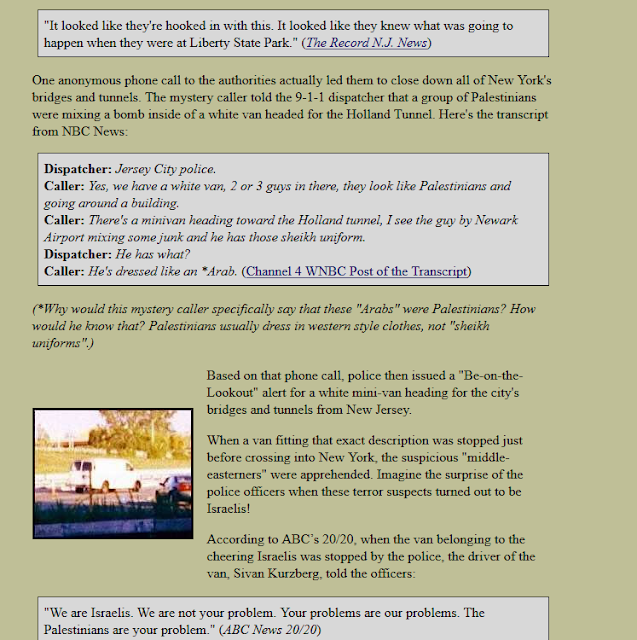 Why did he feel that Palestinians were a problem for the NYPD?


The police and FBI field agents became very suspicious when they found maps of the city with certain places highlighted, box cutters (the same items that the hijackers supposedly used), $4700 cash stuffed in a sock, and foreign passports. Police also told the Bergen Record that bomb sniffing dogs were brought to the van and that they reacted as if they had smelled explosives.
The FBI seized and developed their photos, one of which shows Sivan Kurzberg flicking a cigarette lighter in front of the smouldering ruins in an apparently celebratory gesture.

The Jerusalem Post later reported that a white van with a bomb was stopped as it approached the George Washington Bridge, but the ethnicity of the suspects was not revealed. Here's what the Jerusalem Post reported on September 12, 2001:
American security services overnight stopped a car bomb on the George Washington Bridge. The van, packed with explosives, was stopped on an approach ramp to the bridge. Authorities suspect the terrorists intended to blow up the main crossing between New Jersey and New York, Army Radio reported. (Jerusalem Post 09/12/01)

The van was reported to be laden down with tons of explosives.

What's really intriguing is that ABC's 20/20, the New York Post, and the New Jersey Bergen Record all clearly and unambiguously reported that a white van with Israelis was intercepted on a ramp near Route 3, which leads directly to the Lincoln Tunnel.

But the Jerusalem Post, Israeli National News (Arutz Sheva), and Yediot America, all reported, just as clearly and unambiguously, that a white van with Israelis was stopped on a ramp leading to the George Washington Bridge, which is several miles north of the Lincoln Tunnel.

It appears as if there may actually have been two white vans involved, one stopped on each crossing. This would not only explain the conflicting reports as to the actual location of the arrests, but would also explain how so many credible eye-witnesses all saw celebrating "middle-easterners" in a white van in so many different locations. It also explains why the New York Post and Steve Gordon (lawyer for the 5 Israelis) originally described how three Israelis were arrested but later increased the total to five.

Perhaps one van was meant to drop off a bomb while the other was meant to pick up the first set of drivers while re-crossing back into New Jersey? If a van was to be used as a parked time-bomb on the GW Bridge, then certainly the drivers would need to have a "get-away van" to pick them up and escape. And notice how the van (or vans) stayed away from the third major crossing -the Holland Tunnel- which was where the police had originally been directed to by that anti-Palestinian 9-1-1 "mystery caller". A classic misdirection play.

From there, the story gets becomes even more suspicious. The Israelis worked for a Weehawken moving company known as Urban Moving Systems. An American employee of Urban Moving Systems told the The Record of New Jersey that a majority of his co-workers were Israelis and they were joking about the attacks.

The employee, who declined to give his name said: "I was in tears. These guys were joking and that bothered me." These guys were like, "Now America knows what we go through."

Israel tried to trick the USA into supporting invasion of Lebanon in 1982 by helping with the Marine barracks bombing and blaming that on Palestinians, Iranians and anyone else the (((MSM))) could slime, so we'd be stupid enough to take the bait and join the illegal Israeli war of aggression.

With their 9/11 False Flag, they knew they could trick the USA into fighting endless wars for the glory of Apartheid Israel, which has worked like a charm. Next up, Iran.
Posted by Greg Bacon at 9:06 AM