Why Doesn't FEMEN ever Stage Their Obscene Stunts in Synagogues, Jew Neighborhoods or Israel?

They seem to prefer Christian churches and mosques, but I've yet to read about one of their 'Cunt Stunt' being waged in or against a synagogue, or Jew neighborhoods or Israel. 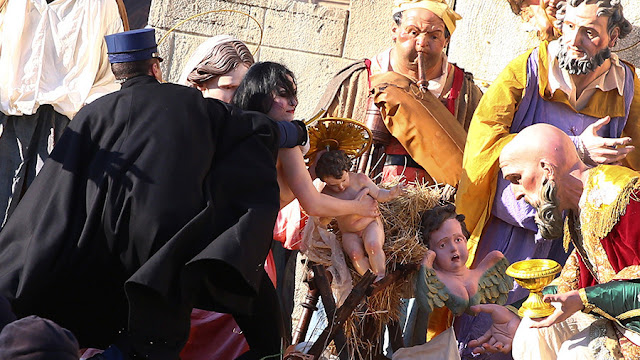 A topless FEMEN activist has attempted to kidnap Baby Jesus from the Nativity scene at St. Peter’s Square in Vatican City on Christmas Day. The protester was stopped by Vatican Swiss guards as shocked believers looked on.

Then there's this stupid stunt, trying to shove the Christian cross up their smelly asses...

Then there's the time they protested in Paris--Pairs, why not Ukraine?--against the democratically elected president of Ukraine, right before Hillary and her mobsters like Nuland set off a 'Color Revolution' and got a bunch of Ukrainians killed with bullets and fire, causing the government to collapse, letting the Western lackey Porky assume power.


If you know which religious cult professes to love Christians, but actually hate Christianity and despise their Lord Jesus Christ, you'll know who is really behind these sick fucks.


Femen, Israel and its Jewish Backers

The interesting thing about Femen for us is two fold. In the first the source of the funding for the organization, which has been reported to be paying double to triple the average wage in the Ukraine, (4) which has been confirmed by subsequent research. (5) The second is the battles that it has been picking or more precisely which group and country it has notably left out of its burlesque-style protests: jews and Israel.

The novel thing about Femen's relationship with Israel is that while there was a rather belated announcement in December 2013 of a Femen chapter in Israel: (6) this was years behind the rest of the world which has seen rapid growth of the numbers of Femen's protesters-for-profit (with credible reports of a 'school' for Femen activists in Paris). (7)

There is also a rather basic Facebook page for Femen Israel, (8) but there is absolutely no Israel-related activity posted on it: only general Femen propaganda and publicity stunts elsewhere in the world.

Even the official Femen 'announcement' of the formation of Femen Israel only has two photos of two different women (one of whom is seriously corpulent) and; as others have noted, (9) these are not controversial, confrontational shots taken in a synagogue or causing problems for the Israeli police. They are simply a tame photo of a woman and another woman (this time topless) on a hill overlooking Jerusalem.

There is none of the trademark Femen violence against religious symbols: no burning Torah scrolls, throwing copies of the Babylonian Talmud into pig pens, no running naked through Hasidic neighbourhoods and so forth.

In other words: the evidence suggests that Femen Israel is simply a shell and can be plausibly argued to be a front group created for the sole purpose of deflecting an increasing tide of curiosity and criticism about Femen not targeting jews, Judaism or Israel at all (in spite of the extraordinarily misogynistic nature of Judaism and the fact that Israel periodically has problems with self-styled 'modesty police' gangs), but rather solely focus on the European and Middle East worlds geographically as well as Christianity and Islam in religious terms.

Our suspicions about jewish involvement in backing Femen as part of the culture war against anything remotely traditional or right-wing are confirmed when we examine Femen's sources of funding.

This must be considerable given that Femen pay each activist double/triple the average Ukrainian wage and also pay $2500 a month for their headquarters building plus have offices and 'training academies' in several countries; most notably France and Germany, and factoring in that this funding must be external to the founders who were from poor families in provincial Ukraine. (10)

From what is known about their funding: the key player appears to be an individual named Jed Sunden. (11) Sunden is a Brooklyn-born American jew who founded a major Ukrainian newspaper/media company; KP Media (which owned the Kyiv Post till 2008/2009 for example) , (12) and also is an active part of the Ukrainian jewish community. (13) Sunden was the man who 'discovered' Femen and it was he who began to give them the oxygen of publicity (and notoriety) for their topless protesting in the Kyiv Post. (14)...

This is in spite of Femen being radically left-wing in its ideological leanings and supporting traditional left-wing causes. It is decidedly odd that Femen should have never criticized Israel (a search of Femen's web pages/links and Twitter/Facebook feeds revealed no criticism of Judaism or Israel) precisely because Judaism is well-known for being highly patriarchal and there have been significant clashes between jewish feminists and jewish religious traditonalists in Israel over the last two or three years.

Yet Femen are absolutely silent on this swirling feminist maelstrom and also on Judaism's anti-female practices!

Indeed Femen have even skirted around Israel totally and protested against Iran! (20)

Hey FEMEN demons, why not do one of your gross protests in a hardcore Orthodox Jew 'hood, like in Williamsburg, NYC? Or if you're really daring, go to Israel to the Occupied West Bank, a town called Hebron, which nutcase Hasidic Jews have taken over, running the native Palestinians out and beating them if they don't move out of their homes and apartments.

Take your act to Hebron and do some of your obscenities in front of some Hasidic Jews. To make it interesting, besides flopping your teats around, take one of their holy symbols, the Menorah, shove that up your crotch and see what happens.

One word of advice: Best say 'Goodbye' to your loved ones and make sure your will is updated before dazzling Orthodox Hasidic Jews with your cunt stunts.

The Anti-Semitism of the Nativity

The Jews and the War on Christmas