How Jews Avoided the Draft & Had the Goyim Fight Their Wars

When I first saw this doc, thought it was some kind of fake created by the Usual Suspects who then would use reactions to their conniving to scream muh anti-Semitism. 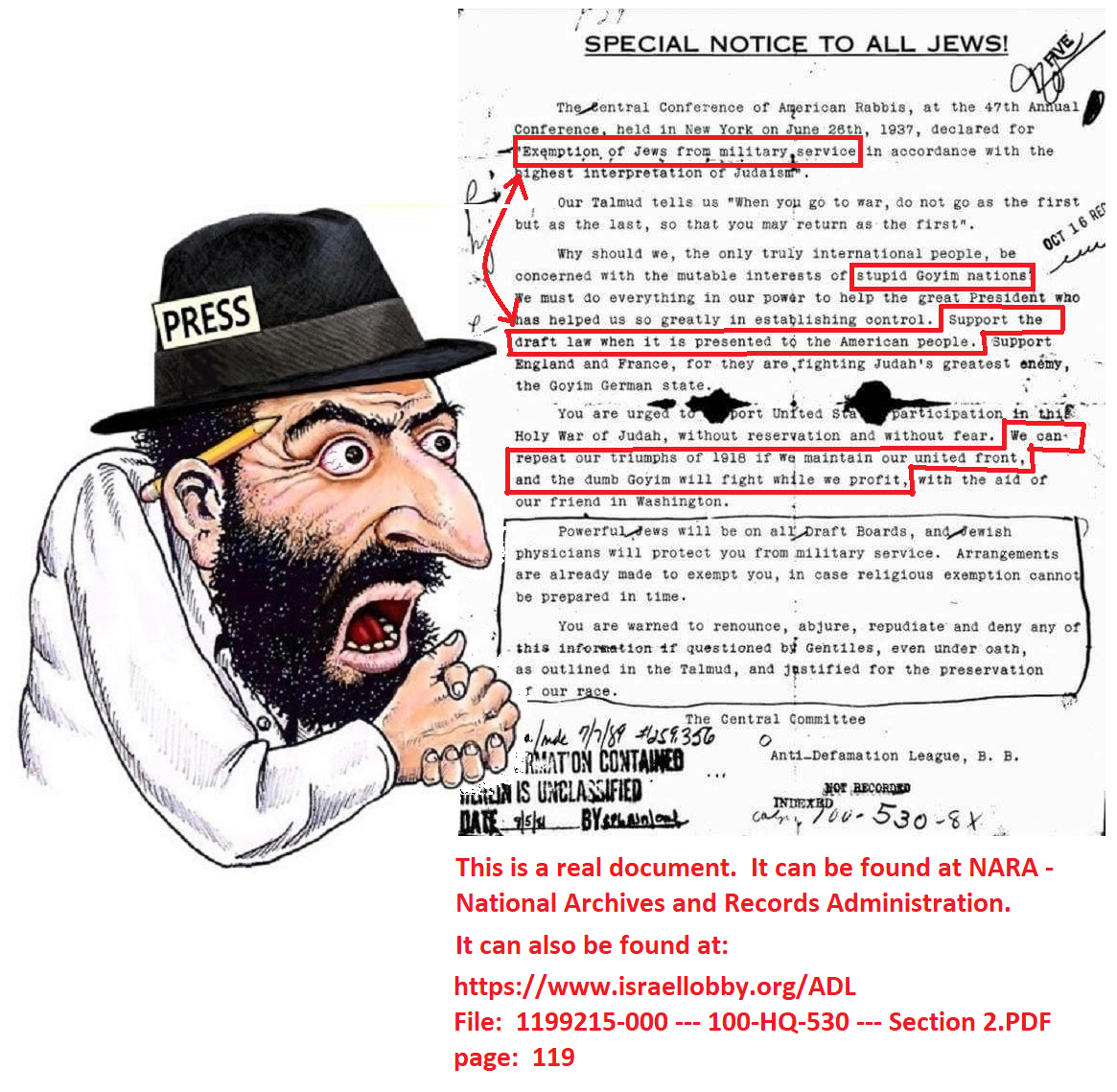 But it's legit. In fact, it can be found on the ADL's website at this link:

This is part of a huge doc drop at this heading, "The FBI and the Anti-Defamation League."


The FBI and the Anti-Defamation League

The following files were obtained by Freedom of Information Act from the FBI. Since the 1940s, the record reveals ADL attempting to liaise with the FBI by offering the ADL member network as an FBI resource. The details of this attempted collaboration by an organization portraying itself as a nonprofit social welfare organization are surprising. FBI field offices report that some ADL operatives are inadequate for the job. The ADL attempts to simultaneously conceal and leverage FBI relationships, even claiming to train the bureau on the finer points of investigation.

The files contain many surprising ADL undercover operations. In 1941 ADL operative Arnold Forster is caught with an associate infiltrating an America First Party event with stolen press credentials. The ADL uses media pressure and offers payoffs to quash a police investigation, according to the FBI.

In 1951 the FBI is tasked by the US State Department to investigate ADL allegations of illicit activities by Arab League operatives in New York. The FBI investigation is cancelled after ADL's undercover operative is found to be compromised and unreliable.

In 1968 FBI Director J Edgar Hoover ordered all FBI field offices to establish liaisons with ADL regional offices, an order repeated by the FBI HQ in 1985. But some in the bureau had second thoughts. In 1969 the ADL infiltrated the 18th annual National Convention of Arab Students. ADL operatives operating under code name pose as reporters and strategize how to gain control of the National headquarters while neutralizing OAS chapters. After receiving the report, an FBI analyst suggests investigating the ADL as an Israeli foreign agent. But the ADL operation seems to have been a quiet success as OAS chapters became less integrated in following decades and gradually change names and begin serving more as campus clubs with cultural (rather than political) outreach.

In 1993 the ADL was rocked by a national crisis when the collaboration of a long-time undercover investigator, Roy "Cal Bullock" and San Francisco Police Department officer (and on-and-off CIA operative) Tom Gerard were discovered spying on California Arab and anti-Apartheid groups. The discovery led to search warrants, raids on ADL offices, and large court settlements for victims of ADL privacy right violations. Files of this episode are located in a separate archive, http://www.IRmep.org/ila/ADL-CA

During the same period, the ADL California offices were being investigated, the ADL asked the FBI to criminally investigate a large number of alleged anonymous phone calls and letters sent to the ADL. The FBI judged many to be "non-threatening" and closed other cases for lack of suspects.

Shortly before 9/11, the ADL won a long-coveted honor: co-hosting and FBI and ADL coordinated "Symposium on Hate Crime and Extremism."

Israel Lobby Archivist note: The Federal Bureau of Investigation at one time possessed up to 10,800 pages of information about the Anti-Defamation League (ADL). However, according to an interim April, 2013 FOIA release letter, some records "were destroyed between the years 1972 through 2007." Also, according to the FBI, "potentially responsive records were not in their expected location and could not be located after a reasonable search." Other historic FBI material on the ADL has been transferred to the National Archives and Records Administration (NARA). Some of this material was released on July 10, 2015. (Release letter). All files are in PDF format. OCR versions have been scanned so that text is searchable.

some records "were destroyed between the years 1972 through 2007." Really? It would be interesting to see what records the anti-American ADL and their FBI flunkies destroyed after the Israeli masterminded 9/11 False Flag.