"When I was fighting in Lebanon, I witnessed the aftermath of a family feud. The patriarch's head had been split open, his brain on the floor. Around him lay his wife and some of his children. All dead. Before I could do anything, one of the murderers scooped up a handful of brain and swallowed it. This is how you will all now operate. Otherwise someone will eat your brain."

Current MOSSAD head Meir Dagan's approach to Israel's perceived and "existential" problems. Given the fact that Dagan's Barak Armored Brigade was in Lebanon during the 1982 Lebanon War, it's quite likely that the murderers he's talking about eating brains were from Dagan's group.

American Airlines Flight 11, from Boston, Massachusetts, to Los Angeles, California, crashed into the north tower of the World Trade Center with 87 people on board, not counting the five terrorist hijackers.

And the stewardess, Betty Ong, stated that the passenger in 9B, Lewin, was part of the hijackers


Nydia Gonzalez, an American Airlines supervisor at its Southeastern Reservations Office, is relaying information to Craig Marquis, a manager at the American Airlines System Operations Control (SOC) in Fort Worth (see (8:21 a.m.) September 11, 2001). According to Marquis, “She said two flight attendants had been stabbed, one was on oxygen. A passenger had his throat slashed and looked dead and they had gotten into the cockpit.” Marquis later recollects that Ong said the four hijackers had come from first-class seats: 2A, 2B, 9A, and 9B. She’d said the wounded passenger was in seat 10B.


Edmund Glazer, 41, of Los Angeles, California, was the chief financial officer and vice president of finance and administration of MRV Communications, a Chatsworth, California, firm that focuses on optical components and network infrastructure systems.

We have a Captain in the Israeli Sayeret Matkal, which is a deep-penetration unit that has been involved in assassinations, the theft of foreign signals-intelligence materials, and the theft and destruction of foreign nuclear weaponry, along with his fellow traveler, Glazer.

The first question is what was a Captain in the Israeli Counter-terror unit, the Sayerat Matkal, doing on Flight 11 that crashed into the WTC's North Tower? Now it appears his traveling companion is an oddity also. The guy in 9A sitting next to Daniel Lewin (9B) was Edmund Glazer, chief financial officer, MRV communications company.

Here is the seating chart for Flight 11 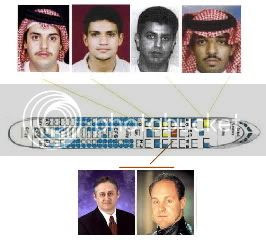 Four Arabs, and a Capt in Israel’s counter-terror and assassin team, plus the mysterious Mr. Glazer?

What's it all mean? That mysterious Israeli passenger has no history until he starts working for MRV. He had some vague resume from North Rhodesia. A look at MRV's board of directors really makes one wonder.

What is MRV and who's behind this firm?

MRV Communications (NASDAQ: MRVC) is a communications equipment and services company based in Chatsworth, California. The company provides communications equipment that facilitates access, transport, aggregation and management of voice, data, and video traffic in networks, data centers and laboratories used by telecommunications service providers, cable operators, enterprise customers and governments.
MRV was founded in 1988 by Prof. Shlomo Margalit and Dr. Zeev Rav-Noy as a maker of Metro and Access optoelectronic components.


Another Israeli run communications company, like Amdocs and Comverse Infosys, that had been wiretapping American phone calls and monitoring the phone logs for years?

MRV looks like an Israeli front company for their counter-intelligence ops, just like the MOSSAD saying, "By way of deception, thou shalt do war."

Cold blooded killers for sure, as this bit of wisdom on how to enjoy the kill, from Rafi Eitan, the legendary former Operations Chief of Mossad.

"I always tried to kill when I could see the whites of a person's eyes. So I could see the fear. Smell it on his breath. Sometimes I used my hands. A knife, or a silenced gun. I never felt a moment's regret over a killing."

Lethal death dealers that will not have one ounce of compassion or regret when they zero in on their victim, or maybe, in the case of 9/11, victims.

Where did this strange radio transmission from Flight 11 come from and who was doing the talking?

Because the talkback button on Flight 11 has been activated, Boston Center air traffic controllers can hear a hijacker on board say to the passengers: “We have some planes. Just stay quiet and you’ll be OK. We are returning to the airport.” [BOSTON GLOBE, 11/23/2001; 9/11 COMMISSION, 7/24/2004, PP. 19] Air traffic controller Pete Zalewski recognizes this as a foreign, Middle Eastern-sounding voice, but does not make out the specific words “we have some planes.” He responds, “Who’s trying to call me?” Seconds later, in the next transmission, the hijacker continues: “Nobody move. Everything will be OK. If you try to make any moves you’ll endanger yourself and the airplane. Just stay quiet.” [NEW YORK TIMES, 10/16/2001; 9/11 COMMISSION, 6/17/2004; MSNBC, 9/9/2006] Bill Peacock, the FAA director of air traffic services, later claims, “We didn’t know where the transmission came from, what was said and who said it.” David Canoles, the FAA’s manager of air traffic evaluations and investigations, adds: “The broadcast wasn’t attributed to a flight. Nobody gave a flight number.” [WASHINGTON TIMES, 9/11/2002]


There's way too many oddities and way too many clues that point to that nation of genocidal maniacs involvment in 9/11 to be ignored.

After all, do you truly believe that a country who has a policy of deliberating targeting and shooting kids in the head would think twice about crashing a couple of airliners into the WTC?
Posted by Greg Bacon at 3:54 AM