Why is the US Congress so obsessed with Iran? What kind of (((force))) takes reps who are supposed to be looking out for the wealth and security of Americans and turns them into rabid haters of all Iranians?

Go to the "Govtrack.us" web page and type in Iran and you'll get 203 hits for anti-Iranian legislation.

The last two days, the US House Knesset has been debating more ways to screw over Iran, while ignoring the pressing needs of America.

Yet go to that same portal and type in 'vet suicides' and you'll get ONE, ONE measly link from a Congressman that is trying to deal with this horrific problem. And it only has a 3% chance of being passed.

Yet over 7,000 vets each year are committing suicide, but is Congress concerned? Hell no, they've got to take care of Israel.

Maybe these scuzzy traitors should re-read their oath of office?


I do solemnly swear (or affirm) that I will support and defend the Constitution of the United States against all enemies, foreign and domestic; that I will bear true faith and allegiance to the same; that I take this obligation freely, without any mental reservation or purpose of evasion; and that I will well and faithfully discharge the duties of the office on which I am about to enter: So help me God.

I've read that oath several times and NOWHERE does it say the Senator or House member shall bear 'faith and allegiance' to Israel. Nor does it say they shall ensure the security and financial health of that Apartheid nightmare.

What kind of malignant entity is forcing these public servants to ignore their oath?

AIPAC reached nearly every lawmaker elected in Tuesday's mid-term congressional elections as part of its effort to educate political candidates on the value of the U.S.-Israel relationship. During the campaign that ended Tuesday, nearly every viable candidate met with AIPAC professional staff members and submitted a position paper summarizing his or her views on U.S. Middle East policy. A non-partisan organization, AIPAC has for decades worked with Republican and Democratic members of Congress to strengthen the ties between the United States and Israel.

Translation: Nearly every lawmaker, except the few stragglers hiding out in bathroom stalls or the cloakroom, was told he or she best tow the AIPAC-Israel line, or suffer short tenure in Congress. Part of this process is obviously the forced submission of a "position paper summarizing his or her views on U.S. Middle East policy," that is to say the targeted politico must state in writing that he or she will enthusiastically support Israel killing Palestinians, stealing their land, and running those able to run off, in short a nod and a wink in the direction of ethnic cleansing. Finally, AIPAC let us know they are "non-partisan," that is to say they have both Democrats and Republicans in their pocket.

Is no one in Congress exempt from this cancerous force?

Looks like black Congress members still love to have a 'Massa.'

Here's what all this slavish loyalty to Israel by our corrupted and sold-out Congress is all about. We send our sons and daughters to the ME to fight wars for the glory of Israel so they can expand into the Zionist fantasy called 'Eretz Israel,' stretching from the River Nile to the Rivers Tigris-Euphartes, from southern Turkey to the Red Sea.

Paid for with American blood and treasure. 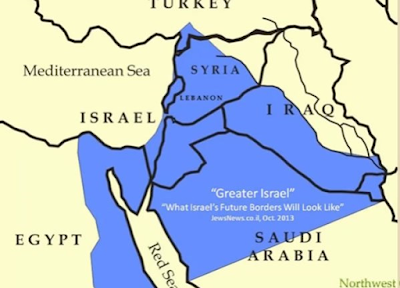 Take a look at that pic again. Notice the blue line thru Syria? That's approximately where the real line is at today, with the territory to the East to be formed into 'Little Israel,' Kurdistan and to the West, Syria, for now, until the unhinged psychos in the Pentagon, CIA and State Department, AKA ISIS-DASEH-al Sham finish off the Syrian Army with help from the USAF.

Bottom Line: Israel and her loyal Jew sayanim don't give a damn about the USA or whether or not we survive, which we won't, if we keep waging these endless 'Wars for Wall Street and Israel.' We'll implode from all that debt and stupidity, then the parasite will be off to leech onto another host while we disappear from the pages of time.

The following quote, gathered from some forgotten site, says a lot:


Dear $ucker$, plea$e donate a$ much money a$ you an afford, maybe even u$e your credit card to give to thi$ cau$e to help our Jewi$h friend$. Or el$e you'll be joining your $orcerer bud Je$u$ Chri$t in a burning pit of $hit, mo$t likely pig $hit.
If you don't, then you're ju$t a bunch of hateful anti-$emite$, who will be moved to the top of our 'People to Do' li$t, if you know what I mean!